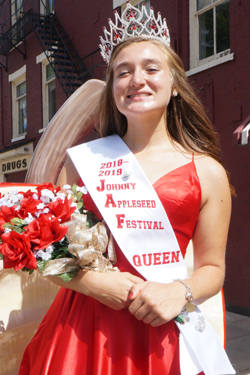 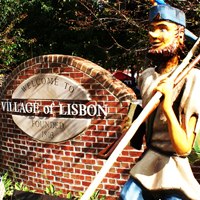 Almost everyone thinks that Johnny Appleseed is the mythical hero of a charming American legend. Actually, this is the nickname of a real person, John Chapman, who was born in Massachusetts in 1774.

As a youth, John followed his father's trade of carpentry. He drifted away from his birthplace and eventually migrated to Pittsburgh. Here he listened avidly to tales about the pioneers who were trekking westward, and to stories of life on the frontier.

Ignoring the disdainful laughter of those in whom he confided, he ultimately set out along with a sack of apple seeds gathered from cider press refuse, an axe, a short-handled hoe and a Bible, to follow an urge to teach religion and to plant apple trees.

His possessions were few. Often he wore only a burlap coffee sack for clothing. Bareheaded and often barefoot even when the weather was freezing, a saucepan on his head when it stormed, he traveled unarmed, often over the dangerous wilderness trails. Sometimes friendly Indians gave him moccasins. He was a welcome guest at homesteads where he stopped and he showed his appreciation by making toys for the children, by telling stories, and by reading aloud from his Bible.

Johnny Appleseed was a gentle man, a student of Swedenborgian philosophy. He never harmed a living thing, and had an almost mystical love of nature. Above all, he had a deep love and respect for all mankind, including the Indian tribes he encountered in his travels.

John Chapman, the beloved "Johnny Appleseed," died in the early spring of 1845 near Ft. Wayne, Indiana, while tending one of his numerous frontier apple nursery plantings. He was 71 years of age. A friend of everyone he met, an honored guest wherever he stayed, respected and beloved throughout the 10,000 square miles of frontier country he traveled, he is remembered today as one of that rare and truly good breed of men who devote their lives to their fellow men with no thought of reward.

Lisbon's very own Johnny Appleseed joins festival queens Hunter Urmson and Hayley McElroy, Vaughn Unger, Vanessa Restifo, and Diana Bernet, as well as court members Samantha Moschgat, Eva DeRuyter, Kenzie Graff, and Hannah Bosel in a retrospect of their time as Appleseed Royalty, and give their personal takes on what it means to be royalty representing the Johnny Appleseed Festival in Lisbon, OH and across the state!

We are also looking for statements from past JAF queens, for a section called "Meet the Queens". In that section of the website, We would like to add names and photos of past queens along with a short statement from each queen, responding to this question...


"What does representing the Johnny Appleseed Festival mean to you?"

We'd like to get as many queens as possible to send me their statements. If you would like to submit your statement, please send your name, a photo (your photo can be from your year as queen/court or a current photo, with or without your crown/sash), the year you represented the festival, along with your statement to Marilyn McCullough. Please add "JAF Queen" in your subject line for the e-mail.

We are also looking to talk to any individuals who were at the very first Festival, and still attend. Please contact Marilyn McCullough if you would like to be interviewed regarding the Appleseed Festival's 51 year run.

Thank you in advance!